Pushing On With Pier 32

You may have noticed a few changes to the site over the past couple of weeks. For one thing, Ian and Gerry have changed the logo. It's a bit of a mixture now, with elements of the original Pier32 logo from the early 90s with the new text that Ian launched this year. We kinda like it, and hope you do too.

We're trying to be a lot more social. I mean, we're a sociable bunch anyway, but it's good to show your face around. The blog now has its own dedicated Twitter account, @Pier32Blog. If you're in the Twittersphere, come and say hello and give us a follow. We also have a Facebook page because let's face it, everyone has a Facebook page. My dad has a Facebook page, which is a thought that genuinely gives me the shudders.

We're also working on getting some video online through our YouTube channel, Pier32TV--early days on that yet, but I'll update as and when we get rolling. I have a few fun ideas to share...

And well, gosh, whatever else we can think of. Pinterest, Google+, Moshi Monsters... All of this is my responsibility as Pier32's new Communications Director. Yes, I came up with that one myself. Shut up, stop laughing.

As part of the deal, I insisted on a sweetener, something to bump up my productivity to help clear all this extra work. It needed to be light, fast and portable. After all, inspiration for bloggage can come out of nowhere, and I need to be ready when the muse baps me upside the head with her baseball bat studded with idea-spikes. So, if you'll forgive me for getting my geek on, allow me to present Pier32's Mobile Blogging Solution. 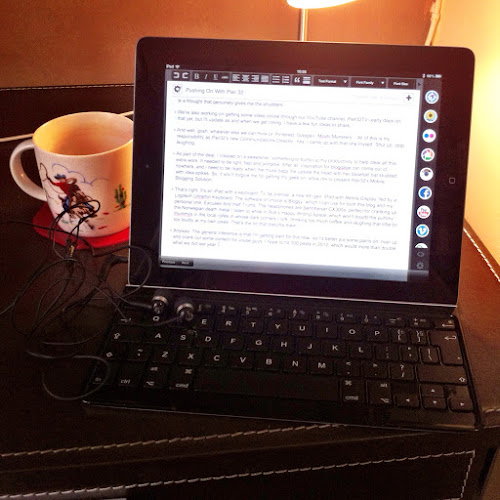 That's right. It's an iPad with a keyboard. To be precise, a new 4th gen. iPad with Retina Display, fed by a Logitech Ultrathin Keyboard. The software of choice is Blogsy, which I can use for both this blog and my personal one, Excuses And Half Truths. The headphones are Sennheiser CX300s, perfect for cranking up the Norwegian death metal I listen to while in Rob's Happy Writing Space. This won't disturb the yummy mummys in the local cafes in whose dark corners I lurk, drinking too much coffee and laughing that little bit too loudly at my own jokes. The unhinged cackling is the bit that disturbs them.

The cowboy coffee mug is by Cath Kidston. Shut up.

Anyway. The general inference is that I'm getting paid for this now, so I'd better put some pants on, man up and crank out some content for youse guys. I hope to hit 100 posts in 2012, which would more than double what we did last year. I've never shied away from a writing challenge, and I hope to rise to this one in robust fashion.

Check out our links in the sidebar for more Pier32 shenanigans, and remember: here at the Pier, we've got you covered.

Email ThisBlogThis!Share to TwitterShare to FacebookShare to Pinterest
Labels: Pier32