Concept To Coat In 25 Days

If you need an example of how fast fashion has changed the face of clothing retail, then you need look no further than a high-collared dark coat with a ring fastening that went on sale recently at Zara in the US. A month before it hit the racks, it was no more than a vague preference in a customer feedback form.

As the Wall Street Journal reports, it can take as little as 25 days for a broad concept–in this case, customers wanting more hardware on their outerwear (that all important ring fixing)–becoming not just a prototype, but an actual product on the racks.

The key is that all-important customer feedback, linked to a tightly focussed and centralised production based largely in Zara's home base of Spain. The coat was prototyped in the small industrial city of Arteixo, before a squad of pattern-makers, cutters and seamstresses got to work. A little under two weeks later, 8000 coats were on a plane at Barcelona. Destination: the racks at Zara stores across the States.

Other retailers are seeing the benefits to this tightly-integrated and streamlined system. US-based companies are beginning to move operations closer to home, using the Caribbean instead of Asia as manufacturing bases. This squeezes up that all-important transport window, getting new items into the shops much more quickly.

However, we have concerns. This fast-track model only works if corners are cut. Can we be certain that QA standards are as high as they could be, given the reputation for fast fashion's poor quality of fit and finish? After all, one reason that the clothes are so cheap is that they are deliberately designed not to last for more than one season. As Zara are redefining the length of a season into weeks rather than months, should we be surprised that clothes from fast fashion retailers don't suit purpose after the first couple of washes?

You have to wonder about the design process as well. A five-day window for prototyping seems awfully slim. It makes you wonder if designing for a limited range of sizes is part of the business plan.

Zara's parent company Inditex are clearly very successful at what they do, and their business model is envied across the sector. Global communication technology working in concert with a localised and tightly integrated manufacturing base have basically allowed them to redefine the way that clothing is designed, produced and consumed. However, as we all know, the fast-track process and its built-in environmental impact is not necessarily that great for anyone... apart from Inditex's shareholders.

Join Breakfast in A Bag on the streets this Christmas!

It's a hard life on the streets, and especially at this time of year. The temperature and dark days don't make it pleasant, but Christmas and its focus on family and togetherness can really put the boot in.

A new charity aims to make a tiny difference this festive season, with a special push to help the homeless of Central London. Breakfast In A Bag are a highly mission-specific cause who aim to do one thing very well–make sure that those in need get a wholesome and nourishing start to the day. Their breakfast station has been open since the summer. This Christmas Day, they will be out on the streets handing out their signature bags. These include cereal, milk, fruit, juice and a cereal bar–certainly enough to get you up and about.

As well as the Christmas Day offensive, Breakfast In A Bag will be throwing a street party next Friday, 18th December. There will be a choir, party hats, mince pies and a few surprises! It'll be worth checking out if you're in town.

We like Breakfast In A Bag for their media-savvy approach to raising awareness and funds. You can donate through Paypal, by handing over supermarket vouchers, or even through their Amazon Wishlist. Of course, volunteers are always very welcome!

BIAB are also great at reaching out directly for very specific items–they've been after crackers recently, funnily enough. After gaining support from famous names like Al Murray, David Baddiel and Nick Knowles, as well as Labour MP Jess Phillips, the charity's profile and message are getting out to a wide audience.

Breakfast In A Bag's inclusive, open approach is making a real difference, and we wish them all the best with their first Christmas on the streets. For more info, and to find out how you can help, hit up the website.

Have An H&M Xmas!

It's likely you've already seen this, but just in case it's passed under your radar this week, here's a little Friday film for you. It's one of those shorts that only really becomes an advert in the last five seconds, so don't feel too guilty about enjoying it. After all, 'tis the season of massively expensive Christmas special ads.

This one gets a nod as it's directed by Wes Anderson, the symmetry-obsessed guy behind such visual treats as The Grand Budpest Hotel and The Royal Tennenbaums. Here, his sharp visual sense is dialed into a sweet little story of a train delayed on its way to deliver passengers for the holidays, and how the inventive Conductor Ralph does his very best to make things right.

With a dry turn from Anderson regular Adrien Brody and a sumptuous mise en scéne (that's set dressing and costumes to you and me), the film is well worth three minutes of your time. I mean, it's no Buster The Bulldog, but it has its moments. Of course, you could question whether the famously fernickety Anderson is bothered that his carefully-tooled aesthetic is being corralled in the services of fast fashion. Or you could just bask in the warm and fuzzy feelings it engenders. Once again, 'tis the season.

As an aside, yr humble writer recently changed day jobs, and I'm happy to report that the place I now work for, Cinelab, had a hand in the creation of the film. And I mean film. None of that digital nonsense here, thank you.

There. Plug plugged. Enjoy the film.

A Beastie Of A Shoe. At Least It's For A Good Cause.

There are fascinating examples of fans buying products designed or promoted by their favourite brands or celebrities with little thought given to whether it's worth it. You could argue this goes all the way up to the week-long queues we used to see outside Apple stores for the latest iProduct. When I used to work in London's trendy Soho, I regularly witnessed block-long lines at cult streetwear store Supreme. Famously, once people queued for a Supreme-branded brick. Yep, a regulation-sized house brick stamped with the Supreme logo.

You do have to wonder if there's some sort of bet in place amongst certain well-placed designers as to what people will fork out on, and how ugly a design has to be before they will walk away. Case in point: the new sneaker endorsed by Beastie Boy Ad-Rock, which is now available for pre-order. Created in conjunction with vegan footwear company Keep, net profits from the sale of the shoe going to Planned Parenthood. Ad-Rock says:

“Given the outcome of our current election, it’s gonna get a lot colder before we can feel that summer sun again. So I collaborated with my friend, [Keep Shoes founder] Una [Kim], not just because I wanted warm sneaks, but because I support small business. I support women-run business. I support Asian-American-run business. Net proceeds of this shoe will be donated to Planned Parenthood because I support a woman’s right to choose and feel that women should not be punished for making decisions about their own lives and bodies.”

All very admirable. Keep are well-known as a highly ethical, worker-supporting company, and Planned Parenthood are an exceptionally worthy cause. However, the problem is in the shoes themselves. They are pretty darn ugly. Made of nylon and cordura, with bungees instead of laces, they look more like nan-shoes than anything you'd want to be seen in on the street. 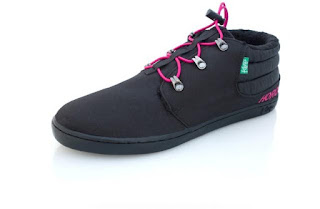 Here's the issue, then. Should you buy the shoe, or others like it, if you support a cause or like the endorsing artist, regardless of whether the item itself is unpleasing to the eye? Is this just a matter of taste, and I'm sneering at the Keep X Ad-Rock Ramos simply because they aren't to my taste? I mean, I'm hardly an exemplar of street style. But I fail to see how anyone would want those within safe minimum distance of their feet.

Fashion and causes and celebrity endorsements have always been bedfellows, and the resultant offspring have frequently been a bit odd-looking. The Keep X Ad-Rock Ramos is just the latest example of that trend, and they're at least born out of the noblest of intentions. I just hope they're more comfortable than they look.