Envision - The Truth about Youth 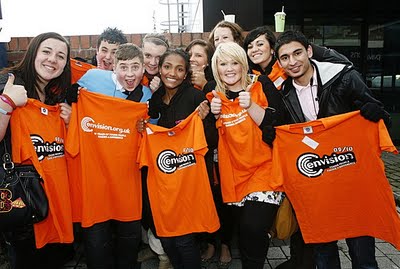 Envision is a national education charity that provides hands on support to young people in schools and colleges in the Uk on issues such as citizenship, sustainable development and help for their local communities. They do this through organising practical projects that will have a positive impact on these young people, their schools and communities.

We were asked by Envision to produce t-shirts for the launch event of their Truth About Youth campaign, itself entitled The Kick Off because it was held at Villa Park, the home of Aston Villa in Birmingham.

Over 300 volunteers attended the event, representing a larger network of 800 young people in Birmingham who are giving up an hour a week for the nine months to develop their own youth-led community action projects. These will tackle issues ranging from youth stereotypes to climate change - the former issue giving rise to the Truth About Youth title.

There was an important networking element to the event - all about encouraging young people and adults to actively engage with each other on important issues such as sustainability, community cohesion, social justice and climate change. The Kick Off was just the first of many other events, activities and programmes that will give a voice to the views and opinions of the young people of Birmingham. Over the course of the 2 year campaign the Truth About Youth will aim to support over 700 young people to deal positively with the challenge of growing up in an environment where there is all too often a mistrust of youth.

In the photo participants had just received our t-shirts and look well pleased with what they've got (we did not set this shot up, honest!). The ethics that go into out t-shirt printing from source to the environmentally friendly printing processes mean that the t-shirts match the principles of the campaign.

Find out more about Envision at their website.
Posted by Scott Hortop at 15:01