Most of you will already have heard all about David Walliams and his fundraising swim along 140 miles of the River Thames from Gloucestershire to London. However, as The View From The Pier can be read all over the globe and some of you may not have even heard of London, more details can be found at the Sport Relief website.

This particular article simply focuses on the bit where David swam by just a few feet from the Pier32 windows, meaning I wanted to come into the office on a Sunday to get my very own close-up glimpse of a new national hero. 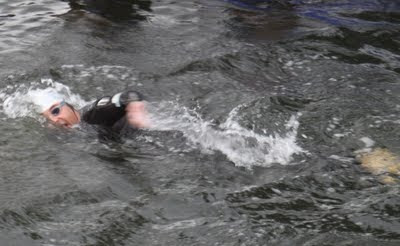 We're very close to the Thames here at Pier32. In fact, we're on an island in the middle of it, somewhere between Hampton Court Palace and Kingston upon Thames. My young son, 9-year-old Alistair - who knows David as an author rather than as a comedian - was actually in the water in his wetsuit as David swam past and then followed him downstream for a few hundred yards, being towed by his mum in a kayak.

Back to the fundraising, David and his team raised more than £1million in the eight days it took him to complete his journey, an amount nothing short of phenomenal that will make a huge difference to a lot of people. Hopefully, this will inspire many more people to get involved in charity fundraising. It could be argued that some will wonder whether their own efforts resulting in a couple of hundred pounds are still worthwhile, but they are, they really are. We work with many charities and all the funds they receive are needed.

Now, those of you that follow Pier32 on Twitter will have seen references to our 'Riverside Meeting Room'. It's actually the pub at the end of the island. It's also where David stopped for a warm drink, a rest, and a massage on his way to Teddington Lock - his target for the day. 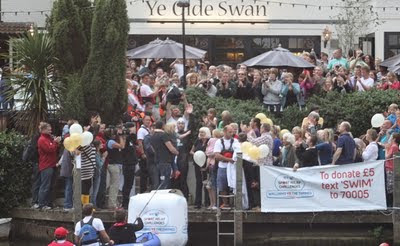 As you can see, an encouraging, welcoming and supportive crowd was there to greet him, including actor and comedian Peter Serafinowicz and actress Sarah Alexander.

So, well done David Walliams. What an effort, what an achievement, what a man. And what about a knighthood?
Posted by Ian at 11:17