The real cost of a shirt from Bangladesh

In the aftermath of the Rana Plaza tragedy, focus is increasingly on the fashion industry, and the way it treats the workers who put the clothes together. It seems stunningly obvious to me that for clothes to be cheap, there have been corners cut somewhere. If it isn't in the quality of the manufacture, then you can be sure it's in an unequal cut of the profits.

But do you know just how unequal that cut is?

An infographic from Canadian magazine Maclean's takes a dataset from consulting group O'Roarke, and shows the disparity between the cost of a cheap shirt and the amount that workers and manufacturers get of the money. A $14 shirt will cost a retailer $5.67. The worker that made that shirt will receive the equivalent of twelve cents.

It's not surprising that calls for a fair deal for all Third World workers are reaching a crescendo. It's clear that something has to change, and if that something is a bit more on a Primark skirt, then frankly it's a price worth paying. 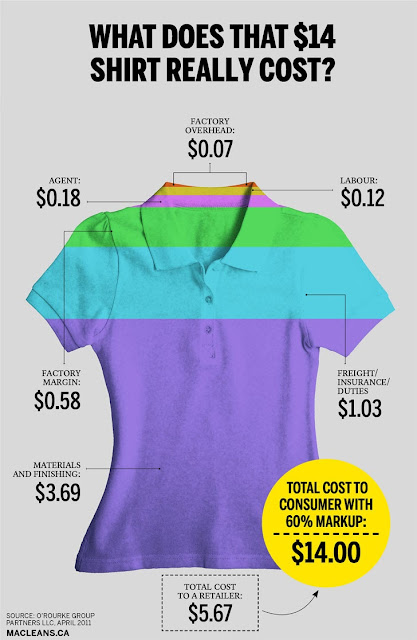