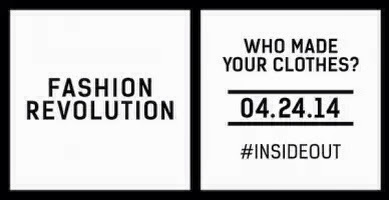 It's Fashion Revolution Day! Today, bloggers, activists and ethical fashionistas the world over are uniting under a common banner and a righteous cause. A year ago today the Rana Plaza disaster showed the world the true cost of cheap fashion; lives lost and ruined, workers exploited and put at risk in the name of profit.
To mark the occasion, I'd like to repost a piece I wrote for Blog Action Day last year. I'd love to say that things have changed for the better, that the families of the victims have been compensated, that the Plaza has been cleared, that everyone touched by the disaster is able to mourn and move on with their lives. Sadly, that's not the case. Most of what I wrote in October is still relevant. That has to change, which is the main factor behind Fashion Revolution.
Read more about what the day means, and what you can do to help prevent another Rana Plaza at the link under my piece.
Let's make a change for the better.

It's a terrible thing to note that one of the defining moments of the ethical fashion movement should be a tragedy. But that, sadly was the case in April of this year when a multi-storey building, the Rana Plaza, collapsed on the outskirts of Dhaka, the capital city of Bangladesh. That building was home to factories that stitched clothing for many big Western outlets. It was the workplace for thousands of garment workers, and it was a death-trap.
Over a thousand people died when the building's foundations crumbled away to concrete dust. Mothers with families, and children, some as young as nine years old, all of whom worked crushingly long shifts to keep food on the table and a roof, however patched and leaking, over their heads. It was a humanitarian disaster, and all eyes were on both the owner of the building, and the fashion houses and supermarkets whose duty of care to their workforce had been so badly compromised.
What happened next was shocking. Rather than admit culpability and offer compensation, many of the companies involved, including global heavy-hitters like Walmart and Gap insisted that they had nothing to do with the disaster. It was only when news footage of clothes labels in the rubble, clearly showing their names began to appear that their tone changed.
That pressure led to coverage of the plight of the fashion worker in the Far East and India on an unprecedented level. Shows like the UK current affairs flagship Newsnight ran damning pieces on the disaster and its knock-on effects. Something had to change.
The Bangladesh Fire And Safety Agreement, signed in July by many of the manufacturers with interests in the Rana Plaza, is the first government-backed accord to give factory workers in Dhaka and beyond, whose economy depends near-exclusively on fashion, more of a say in how their workplaces are run. Basic health and safety standards, including the banning of locked fire exits (a factor in many factory deaths) and agreements on better working hours and working conditions.
Even now, though, some manufacturers are dragging their heels. Gap and Walmart refused to sign the BFSA, deciding instead to set up their own, internally-monitored programme. Many families are still waiting for any form of compensation. And changes taking place through the BFSA will take time to filter into the system. It felt like a victory for human rights in Bangladesh, but one that needed to be fought for every step of the way.
In September, it happened again. The Aswad factory in Gazipur caught fire, trapping and killing several garment workers. There was a sudden, sickening sense of deja vu. A dangerously sub-standard building, missing or disabled safety features, an owner who didn't give a damn about the businesses he crammed into his high-rise.
And worse, the same blithe denials from the multi-nationals at the heart of it all, the same meaningless statements of regret that only became apologies when their clothes were found draped in the wreckage. All the advances that had been made since Rana Plaza seemed to vanish like concrete dust in the wind.
The human rights abuses that the fashion industry enables and allows to continue are endemic in the industry, and names that you know and trust are complicit. Or worse, silent and secretive about their suppliers. Our partner in the Human Friendly Fashion Bloggers event for Blog Action Day, Ms. Wanda's, has launched a video with some very disturbing allegations. I urge you to watch it before it gets taken down...

So, what can we do in the face of these seemingly insurmountable odds? We're working against a huge global industry that issues nothing but lip-service to human rights concerns. All that seems to concern them is the bottom line, and if that means out-sourcing work to contractors who run dangerously substandard buildings and fill them with underpaid, overworked, underaged workers with no rights, then, well, so be it. I'm not trying to paint them as moustache-twirling black-hats--running a global supply train is tough, and keeping it ethical even more so. But the abuses are there, and the worst bit is that when they're exposed nothing seems to happen to change it.
If that notion horrifies you as much as it does me, then there is something you can do. You're a consumer with purchasing power, and access to the most powerful and integrated communications network that the world has ever seen. So use it.
High Street companies don't like to be seen as slave-masters, and bad publicity is poisonous to the wholesome image they like to portray. Keep yourself informed, using bloggers and news sources like (ahem) this one, and make a noise when you hear about humans rights abuses like the one above. Stick something on Facebook. Tweet a link. Email a brand. Let them know that this can't go on. If Mothercare have sorted out their factories, then why aren't they shouting about it? Transparency is vital if we're to believe a global company when they say they've changed.
The fight for an ethical fashion business is going to be a long one, with many more pitfalls and tragedies along the way. But it's a fight worth fighting, and persistance is all. The multi-nationals want us to give up and go away. Tough. We won't.
Because what we want is simple. We want workers the world over, from Newcastle to Nairobi, from Dhaka to Darlington, to be treated with respect and concern for their well-being. We want them to be paid a fair wage. We want them to have a say in how the business they contribute their labour to is run. And we don't think a factory floor is any place for a nine-year-old. It's not much, in the great scheme of things. New figures show tha an extra 25p on the price of an item of cheap clothing would, if properly distributed, triple wages and ensure that factories are safe places to work. Can we seriously say that's a price we're not prepared to pay?