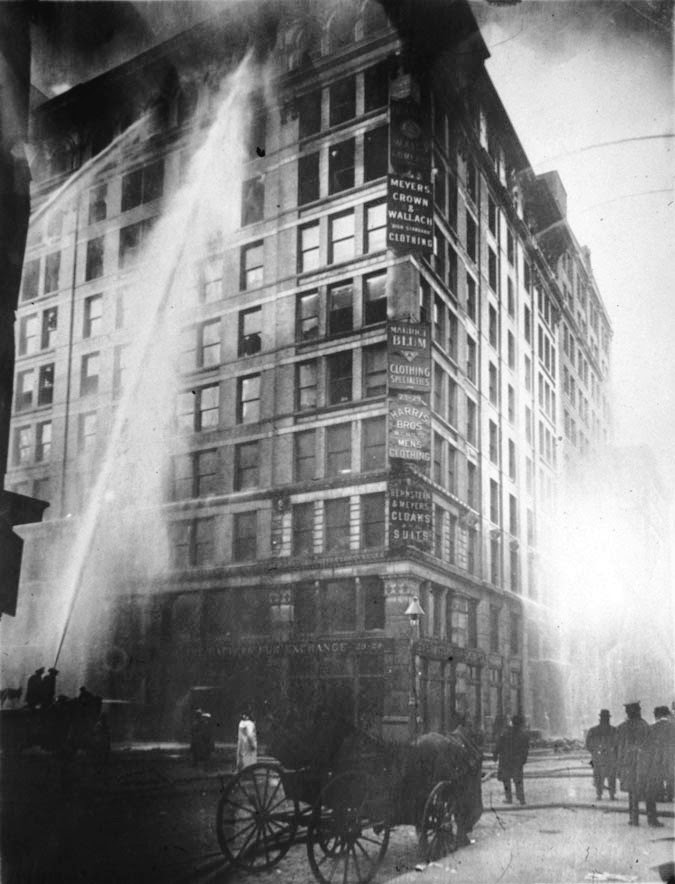 On March 25th 1911, the Triangle Shirtwaist Factory, based in the Asch Building in New York went up in a blaze that would claim the lives of 146 garment workers. It was the worst disaster in the city's history until the terrorist attack on the World Trade Centre, nearly 90 years later.

The deaths of these 123 women and 23 men was, in large part, down to the negligence and greed of the owners. The doors to the stairwells and exits had been locked to prevent pilferage and unauthorised breaks. Escape from the blaze was only possible by jumping out of the windows. The Triangle Shirtwaist Factory occupied the eighth, ninth and tenth floor of the Asch Building.

That event marked a sea-change in workplace safety legislation, and sparked the rise of unionisation in the garment industry. The deaths of the Triangle Shirtwaist workers would ensure that their comrades would never have to suffer the same conditions that had led to their needless sacrifice.

I'm not the first writer to compare the Triangle Shirtwaist fire to the collapse of the Rana Plaza building, but the parallels are inescapable, and history looks to be repeating itself. The deaths of the Rana Plaza seamstresses took place in a workplace culture where poor treatment and abuse of the workforce was commonplace. The building was substandard, and safety features were non-existent or unfit for purpose. Worst of all, the bankers and shop workers who shared the Rana Plaza were aware of its poor condition and had been evacuated days previously. The garment workers who died were told to go back to work or lose their jobs, on the morning that the Rana Plaza lost structural integrity and collapsed.

Fortunately, in a mirror to events following the Triangle Shirtwaist fire, things are starting to change. The garment workers of Bangladesh are unionising, under new laws that allow them to do so without permission from their bosses. The Western companies whose collusion led to the conditions rife in the Indian garment industry are signing up to safety accords, and slowly paying out compensation. Thousands of factories are being independently assessed for both safety and worker treatment. The setup of staff participation programmes and anonymous telephone helplines is starting to put a little power into the hands of the people most responsible for the profits of the owners of the buildings and the multinationals that bring the work to them. It's also worth noting that the growth in cheap smartphones means that many workers are posting and tweeting about their own experiences.

Most importantly, a global audience has become aware of the abuses carried out in the name of providing their cheap clothes. When even fashion bible Vogue finds room to talk about ethical fashion, you know that things have changed.

As we approach the first anniversary of the disaster, fair-trade pioneer Carry Somers, writer Lucy Siegel and ethical fashionista Livia Firth are launching Fashion Revolution Day, a day of activism and information. We're urged to wear our clothes inside out, and to get curious about how they're made, who makes them and the conditions under which they work.

We'll be covering more on Fashion Revolution Day as we get closer to April 24th. For now, check the website, take a closer look at the clothes you wear, and join millions of people worldwide in helping to make sure that we never see anything like Rana Plaza or the Triangle Shirtwaist Fire again.

Find out more about the Triangle Shirtwaist fire on Wikipedia.
Posted by Rob at 10:42