The End Of The Big Society 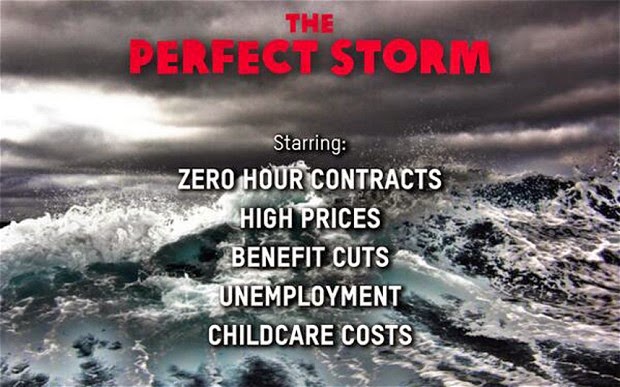 Last week saw the final nail knocked into the coffin of David Cameron's Big Society. It's been coming for a while: coalition austerity measures have created a steady erosion in charity donations, while cuts to public services have meant that those charities are expected to do more. The notion that "we're all in it together" has been laughable for a while, but recent developments have turned the phrase into a sick joke. In fact, the very opposite seems to be true now, and we're seeing government and the third sector squaring up for a fight.

Referrals to food banks have spiked to levels unseen since the lean years after World War 2. That's an unfortunate statistic for a government desperate to claim that austerity is working. It's a message that they would prefer to have disappeared.

The Trussell Trust, the voluntary body in charge of administering the broad majority of food banks has, according to evidence given by its head, Chris Mould, to the Panel on the Independence of the Voluntary Sector, been told to keep quiet about the numbers it refers to help. Aides working for The Department of Works And Pensions have, according to Mr. Mould, twice warned the Trust that if they continued gathering data and published it, there could be dire consequences. The DWP has also forbidden Jobcentres from accepting Trussell Trust vouchers, which have a questionnaire listing the reason for referral on the back.

Meanwhile, Oxfam has been reported to the Charities Commission by Tory MP Conor Burns for their latest ad campaign, which makes explicit the massive increase in poverty and homelessness under the coalition. Burns claims that the campaign is overly political. He's right, of course: a spike in the numbers of people struggling to make ends meet is a clearly political issue. But that's not what he means. He just wants to shut Oxfam up for revealing facts that are deeply uncomfortable for the government.

The claim that charities are becoming politicised is one that the coalition are making more and more often. Ian Duncan Smith, the Minister for Works and Pensions, refuses to meet with the Trussell Trust for that very reason. The thing is, of course, that charities are set up to highlight and struggle against inequality. If government policy is a direct cause of that inequality, then it's only proper that charities should say so, however inconvenient it is for the coalition's preferred narrative.

The Cameron notion of government, charities and volunteers working together to make a better Britain have been shown time and time again to be a sham. Now we're seeing the ugly, bullying face of a political class confronted with charities that cannot stay silent about the abuses they see on a daily basis. As the government start discussing a new programme of compulsory public work that every school leaver will be signed into--effectively a revamped National Service--I think the time has come to disabuse ourselves of the notion that the Big Society was ever anything but a big fat lie.
Posted by Rob at 08:00