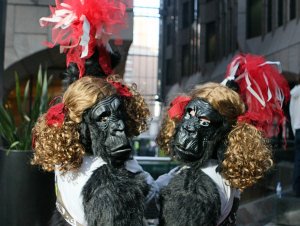 During the early hours of 27 September a blanket of mist settled over London and the city was at peace. But not for long... as the sun's rays began to break through, hundreds of gorillas emerged from London's streets and a gorilla gathering started to form in the city. This was the 2008 Great Gorilla Run and it was set to be amazing.

By 10:30am over 732 dedicated Gorilla Organization supporters, dressed in their customised gorilla costumes had gathered at the start of the run in central London. This was the first time in history that this number of people dressed as gorillas had gathered in one place making the 2008 Great Gorilla Run a record breaking event! Wildlife conservationist and television presenter Bill Oddie was in great spirits and after an exciting build up, set the gorilla runners off along the 7km route.

As the gorillas spread through the streets of London thousands of onlookers gathered and TV crews from around the world captured the moment on film.

To date over £250,000 has been raised by gorilla runners for the endangered gorillas of central Africa - a fantastic achievement. Elizabeth Roberts, who raised over £4000 was this year's top fundraiser and as a big thank you for her efforts, adventure travel company Explore, who sponsored this year's Great Gorilla Run, has offered Elizabeth a once in a lifetime trip to see mountain gorillas in the wild in Uganda.

No, Pier 32 did not supply the Gorilla costumes! Pier32 supplied ethically produced t-shirts from our African supplier Starworld.

To see more pictures from the event, for more information and to sign up for the next Great Gorilla Run on 26 September 2009 visit www.greatgorillas.org. Our congratulations go out to everyone who took part!
Posted by Scott at 12:56