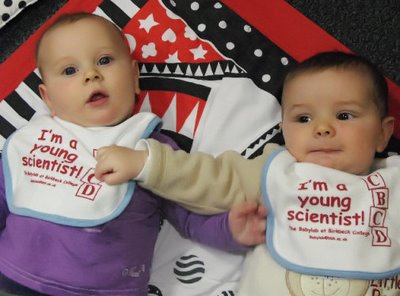 It's too easy to think that Pier 32 is just about custom promotional t-shirts. But that's far from the full truth - we supply all sorts of promotional clothing, from outerwear to vests. You can also have us customise accessories such as tote bags and, in the case of children, bibs. Which is where another of our customers, the Centre for Brain and Cognitive Development comes in.

The Centre for Brain and Cognitive Development (CBCD) was founded at Birkbeck College, University of London, in 1998. It has grown steadily and is now internationally recognised as one of the leading centres of its kind. Its mission is to investigate relations between postnatal brain development and changes in perceptual, cognitive, and linguistic abilities from birth through childhood and late adulthood.

For adult volunteers, behavioural studies usually take up to 30 minutes and involve watching sequences of pictures or listening to sounds and making judgments about them. With such experiments the Centre study the response time and accuracy of participants to clarify the thought processes (such as attention or working memory) involved in the task.

Many studies at the Centre use EEG (electroencephalography). This is a safe and non-invasive method of studying brain electrical activity through a net of sensors placed on a participant's head. The sensors pick up tiny electrical signals that can then be processed to learn more about the pattern of brain activity during the experimental task, (for example judging the similarity of 2 pictures, or detecting previously unseen faces). This technique can be used to answer many different questions. How does the brain extract different bits of information about a face? What happens in the brain when you see a novel image? Do left and right hemispheres process different kinds of information?

The Centre also incorporates the Babylab - which is where our bibs come in! The Babylab studies how babies learn and develop, particularly during the first 2 years of life. Some of the areas investigated include how babies recognise faces, how they learn to pay attention to some things and not others, how they learn to understand what other people do and think, and how their language and understanding of the world develops.

Generally studies take the form of simple games in which babies are presented with various interesting things to look at and listen to. Like short video clips or cartoons on a computer screen or more interactive studies involving showing the babies different toys or objects. A researcher might play a game with a baby to understand more about how they think and learn different skills. In addition to studies where they simply observe babies behaviour they also use various methods for measuring brain activity including the EEG 'hairnet' of sensors and the following of eye movements.

As well as studying typical brain development in infancy, the Babylab is one of the only laboratories in Europe that studies brain functioning in very young children with autism and William’s Syndrome.

We have supplied T-Shirts & Bibs sized for babies of 3 - 24 months to the babylab - and on the front is printed the motto: "I'm a young scientist" - never too young to start!

The centre is continuously looking for adult volunteers between 18 and 35 years old to take part in behavioural studies as well as in studies on brain activity, and babies in their first two years. Visit their website to sign up.

Sadly most of us here at Pier 32 are far too old to have the Centre delve into our psyche...
Posted by Scott at 14:51