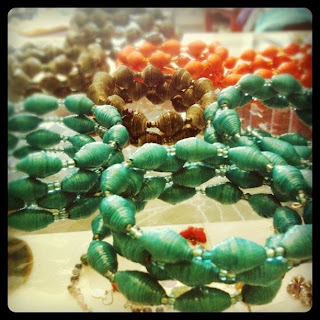 In 2010, journalist Shanley Knox was reporting on AIDS projects in Uganda, when she came across a girl called Cossy, whose story would inspire her in ways she couldn't have imagined.

Cossy Nakate was 7. She was living with her aunt after both her parents had died, and was being shuffled around from relative to relative. She was frequently neglected and abused. But the thing that struck Shanley most about Cossy was her attitude; the sparkle in her eye, her refusal to give up. As she spent time with Cossy and the other girls and women of the village where they were staying, Shanley saw that they all had the same lively, forgiving nature and joy of life.

She decided that she wanted to do something to help these women. When she returned to the States, she brought back a bag of locally-made necklaces that had been made from waste paper, bone and horn. The junk and litter of the African landscape had been transformed into something of beauty and value. It was a metaphor that Shanley embraced. From those seeds she started the Nakate Project.

Nakate's jewellery contains a story and a kernel of hope. Shanley works with the women of Uganda to create beautiful pieces that are transforming lives. The women are given opportunities to start their own businesses, and become independent. Over 90% of the women working with the Nakate Project have opened bank accounts, and invested their funds back into buying livestock, building themselves homes or paying off loans. At the same time, Nakate promotes sustainability, using recycled materials in new and innovative ways to create jewellery with a design aesthetic that's downright high-end. This isn't junk.

“When you wear Nakate, you are celebrating the core values of sustainability, respect and empowerment: We believe that profit is a mechanism for generosity. Profit is a tool. Most use profit for greed, their own gain, but that doesn’t need to be so. We believe profit makes generosity sustainable.”

Nakate are a prime example of a company that's taking sustainability to new levels. They're empowering women who would otherwise be victims, and creating desirable items out of trash tat would otherwise be in landfills. It's a remarkable and inspiring story that shows how girls like Cossy can make a difference in ways that you'd never expect.

Check out the collection and read more about the women of the Nakate Project at their website.
Posted by Rob at 08:00