Angora: The pressure's on Zara 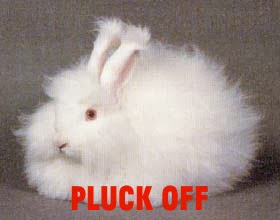 It seems like the explosive footage released earlier this month by PETA (People for the Ethical Treatment Of Animals) of the abuse suffered by angora rabbits in Chinese factories has had an immediate and striking impact. Following H&M's announcement that they were discontinuing their angora range with immediate effect, most big-name UK retailers, including M&S, Next, Top Shop, New Look, Esprit and Asos have followed suit, pulling angora from their shelves.

As ever with this sort of backlash, there's a holdout. In this case it's Zara, who as we've reported in the past are not the most ethical of High Street names. The flagship chain store of the Inditex group, the world's largest apparel retailer, Zara have refused to pull their products. Not only that, but they currently feature over 60 angora items on their web-shop.

But pressure is mounting. It's notable that after they were tagged as a polluter in the Greenpeace Toxic Threads campaign, Zara signed up to a pledge to clean up their act after less than a week of protest. An online petition organised by campaigning heavyweights SumOfUs has garnered over 250,000 signatures (including, in a personal capacity, yr humble author) and all eyes are now on the Spanish giant to see what they'll do next.

“Ninety percent of angora fur comes from China, where there are no penalties for abuse of animals on farms and no standards to regulate the treatment of the animals. The reason for this cruelty comes down to profit, pure and simple. Angora has a trade value of £22 to £28 per kilogram, but the longer hair that comes from plucking, as opposed to shearing, can sell for more than double that.

“The big retailers have a responsibility to tell their suppliers that their customers won’t accept the brutal treatment of angora rabbits. H&M acted, saying in a statement that it will step up inspections of its sub-suppliers before selling angora again. In the meantime, customers can take back their H&M angora products for a full refund.

“If they can act, Zara can too. But right now, Zara’s website is full of angora sweaters, gloves, hats, and scarves, made from cruelty. Zara needs to pull these products immediately and commit to ethical production of angora, or they can expect a backlash from customers this holiday season."

Hear hear to that. I've decided not to embed the PETA video on the site: frankly, it's too upsetting. If you want to see more, search online.