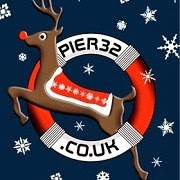 As we come to the end of another busy, eventful year at Pier32, with yours truly in my eyrie writing away furiously, let's take a trip back in time and have a look at some of the more notable posts I've put on the blog in 2013.

In January, we were lucky enough to join our pals at Kartforce at the NEC in Birmingham of a day of high-octane action on the track: Getting The Need For Speed With Kartforce.
On a gentler note, we joined forces with everyone's favourite Peruvian marmalade-loving bear, Paddington: Follow The Bear.

February saw Pier32 announce their range of American Apparel wear, and we examined the gleeful way they court controversy: Sex Sells And We're Buying!
On a less saucy tip, we took to the streets with charity clients Saŋk●tuary, who apply the parable of the Good Samaritan to the streets of Telford every Saturday night: Street Life.

In March, we braved the Zombie apocalypse with the brave souls who run the real-life game 2.8 Hours Later.
We also looked at the way 3D printing could be on the verge of changing the face of fashion for ever: Your Style, Your Way.

April was, of course dominated by the dreadful news of the Rana Plaza collapse, a news story that has brought the abuse of third-world workers in the fashion industry well and truly onto the front page. The tragedy would eventually claim over a thousand lives, and the repercussions continue to this day: The Rana Plaza Collapse.

May saw a post on the recycle path of an old rock t-shirt become one of our most popular articles of the year. Who knew there were so many Ned's Atomic Dustbin fans out there? What To Do With An Old Ned's Atomic Dustbin T-shirt?
Pier32 also showed their support for the IF Campaign, lobbying the G8 summit in June to ensure that everyone has enough to eat: There's Enough Food For Everyone If...

June, and the weather finally started to warm up. Gerry, the voice of Pier32, shared a summer track from his personal DJ box: Here Comes The Sun?
Meanwhile, Guru Ian's trip to Barcelona came up trumps as he discovered Vaho recycled vinyl bags: Vinyl Addiction.

A hot July saw us admiring Pier Crush Vivienne Westwood's new closed-loop designs for Virgin Atlantic: Fly The Ethical Skies.
Our exploration of the Future Threads Project showed just how important social media and the web are to ethical fashion, helping to rewrite the business paradigms from the inside out: Connecting The Threads.

A thirsty August led to our celebration of Common Grounds, an award-winning Fairtrade cafe in Belfast: Common Grounds: an uncommonly good cafe!
We also looked at the difficult position any charity that wants to expand can find themselves in, and how we need to rethink the relationship between charity and donor: Uncharitable Behaviour.

Ah, September. As we start to mellow into autumn, I had a look at how far the notion of ethical fashion has come in the last few years: Keep Up The Good Work.
We highlighted Gift Your Gear, a charity helping to recycle outdoor gear for charities helping to get underprivileged kids into the great outdoors: Gift Your Gear And Make A Difference!

In October, we joined writers worldwide for Blog Action Day, talking about human rights. My piece on the Rana Plaza garnered a Special Recommendation from UK ethical fashion star Ms. Wanda's Wardrobe - a real bright spot in the year for me. Beyond Rana Plaza: The Future Of Human Rights In Fashion.
Pier32 also moved into ethical lighting, and I put together a short promo video for the new venture, exercising both my skills with a Promarker and my powers of voice-over... Pier32 Eco-Lights

November, and as the weather closed in, Pier32 onesies and customisable sledges became the products that everyone wants this winter: The Pier In Winter 2: This Time It's Onesies (and Sledges)!
We also took a look at The House Of Wandering Silk, and the wonderful things that they can do with waste silk.

And all of a sudden, it's December. We celebrated the Ethical Fashion Forum's Source Awards, even if our predictions of the winners were a bit off. The Source Awards: Everyone's A Winner!
Meanwhile, the big news story is the ongoing controversy over Chinese angora, and the particularly cruel way it's harvested. That one will rumble into 2014, I'm sure.

So, Christmas is hardly any sleeps away, and Pier32 is running down the shutters. We're giving our ethically-treated elves plenty of time off for the festive season. The production line and offices will be closed from lunchtime on the 20th December, and we'll reopen for business on Monday 6th January, although both Ian and Gerry will be keeping an eye on emails.

As for me, I'll be closing down the eyrie, filling up my coracle with gifts and paddling off to spend Christmas with my beloved, a glass or two of ruby ale, a very large figgy pudding and a festive jumper made from the very finest British wool. What more could an ethical fashion writer want? 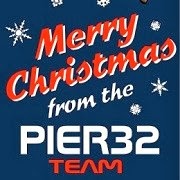