A Web Of Wonder 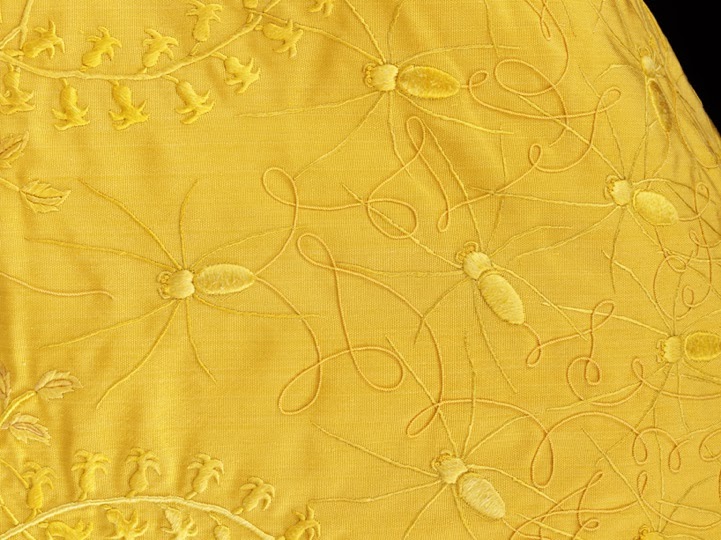 We're a big fan of silk here at the Pier. We've already bigged up the brilliant House Of Wandering Silk on the blog (and indeed put our money where our mouth is by treating Mrs. View to one of their fantastic scarves for Christmas). It's a sustainable, and relatively cruelty-free fabric.
Now, two experts living in Madagascar have created the ultimate in silk-wear. It's not exactly what you'd call affordable. In fact, they've come up with something that's unique and nearly priceless.
Fashion designer Nicholas Godley and textile guru Simon Peers have collaborated in a project that is as mad and glorious as any I've come across as a fashion writer. They have spent the last three years creating an astonishingly beautiful embroidered cape out of golden spider silk.
The process has not been attempted in over a hundred years, and it's not surprising when you consider just how labour intensive it is. They employed a team of over 80 experts to seek out the elusive golden orb spider from the Madagascan jungle. When found, the spiders were milked to produce the lightweight, perfectly cylindrical silk that was eventually woven to create the stunning final product. The silk of 1.2 million spiders has gone into the cape, which is amazingly durable considering its apparent delicacy--the golden orb spider produces silk thread that's virtually unbreakable.
The cape is as much an artwork as a wearable item, something that Nicholas Godley freely admits. He says:

"I hate sounding pretentious, but what we wanted to do here was produce something that was a work of art. I feel like what we’ve produced in some ways is more exceptional because of the extraordinary amount of effort that went into it. If we were doing all of this to make money, I could think of much, much easier ways to do it."

Personally speaking, I'm glad Nicholas, Simon and their team made the effort. They've created an artifact that shows how a collaboration between man and nature can be much more than the sum of its parts.
The cape is currently on loan to the American Museum Of Natural History in New York. Check the link to My Modern Met for more pics. Trigger warning: there are images of the spiders there, and the golden orb is the size of a truck.
My Modern Met