You would think, in this era of dwindling fuel supply, rising prices and global warming, that making our towns and cities more bike-friendly would be a no-brainer. Cycling is, after all, a low-carbon, low-cost, safe form of transport that has the added benefit of keeping you fit.
But we are a nation of petrolheads. Note that one of our favourite TV shows features three middle-aged blokes mooning over horribly expensive cars. Many local councils talk the talk when it comes to including provision for cycling in their transport infrastructure, but the end result can be less than satisfactory. My home town of Reading is about to launch a bike hire scheme based on the Barclays-backed initiative that has been running with a questionable amount of success in London, but there's no sign of additional bike lanes to cope with the presumed increase in traffic.
London, of course, has its own problems when it comes to putting cyclists into the mix. The self-styled "cycling mayor" Boris "Wurzel" Johnson has bowed to pressure from car lobbies and Transport For London in keeping the roads fit for cars, buses and lorries. Pedestrians and cyclists have to take their own chances, and the death toll has been rising. The end of last year was a particularly black time, as seventeen cyclists were run down on London roads in the space of a fortnight. The "cycle superhighways" that were launched a couple of years back are simple blue-painted lanes that most drivers ignore. Something, clearly, has to change. 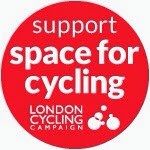 Pier32 is a long-time supporter of the London Cycling Campaign, supplying clothing for them since 2007. We met up with the LCC at the London Bike Show a couple of weeks ago, to cheer on their Space For Cycling campaign. It's a straightforward and sensible set of waypoints towards a healthier, safer capital. Protected cycle lanes, 20mph speed limits and safer cycle routes to school are all great ways to get people out of their cars, helping to ease the strain on London's congested highways. In the run-up to the May by-elections in which the whole of Greater London elects its borough councils, now is the time to put cycle-friendly policy at the top of the agenda for every council candidate.
Many major European capitals have included cycling as a major part of their transport strategy. In The Netherlands, cyclists have priority. It's simply the way that people get around, with the knock-on effect that there's no sign of the testosterone-fuelled lycra-clad morons that give the bike a bad name in the UK. Making room for cycling is, to me, obvious, and I'm delighted to big up the London Cycling Campaign on the View.
Find out more about why it's good to make Space For Cycling at the LCC website.
Space For Cycling.
There are a lot more pics from Anna at the LCC at this Flickr set.