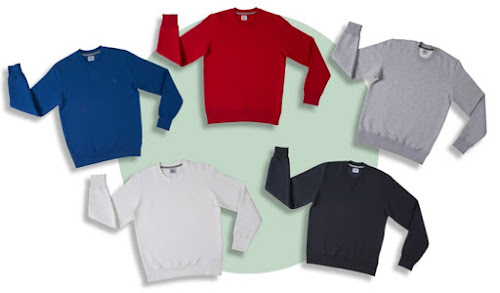 The notion of clothes that are designed to last for a season, only half a year, has long been a bugbear of the ethical fashion crowd. Clothing should be durable, surely, keeping its good looks and comfort for years. If you have to pay a little more, so be it. That investment will repay itself off many times over the life of a garment that's built to last. Vivienne Westwood says it best: Buy Less. Pay More. Choose Well.
This is a mantra that designer Tom Cridwell has taken to heart. He's already making a name for himself, with a successful Kickstarter under his belt for a range of colourful trousers that have been bought by Leonardo DiCaprio, Ben Stiller and Daniel Craig. Now he's aiming to disrupt the fashion industry again with a new product: the 30-Year Sweatshirt. Made with the finest materials and sewn by Portuguese artisans, this new venture aims to do what it says. To create a piece that will be a staple of your casual wardrobe for not just years, but decades.
Tom spoke exclusively to us here at the Pier, and we asked: what drew him towards the notion of sustainable fashion in the first place?


"I founded the Tom Cridland brand a year ago, specialising in making luxury trousers in unique colours. We had great feedback, got stocked at Wolf & Badger in London and, as I became more and more familiar with the fashion industry, I grew increasingly aware of the notion of built-in obsolescence - the idea that clothing brands make garments systematically to only last a year or two so that consumers will be forced to continue buying.
This should not be the case when it comes to wardrobe staples like plain colour sweatshirts. Sustainable business in fashion can be created from consistently making beautiful and original designs. Built-in obsolescence is not necessary and something like a beautifully made sweatshirt should last a lifetime."

No argument from us there. The Sweatshirt (sorry, I can't help but capitalise, it feels like that sort of product) is made from organic cotton, and comes in six colourways unique to the range--these have been blended to Tom's exacting standards from up to six other shades to get the colour he had in mind.
The sweatshirts are made in Portugal by a group of craftsmen that use traditional loopback techniques to create a garment that is both sturdy (let's not forget, the sweatshirt was originally designed for athletes) and keeps its looks for longer. I wanted to know what made Tom decide to go to Portugal.


"I am half Portuguese and I strongly believe their rich tradition of making durable clothing by hand is overlooked. The Portuguese shoemaking industry is booming once again. I think this project can hopefully also draw attention to their amazing textile heritage." 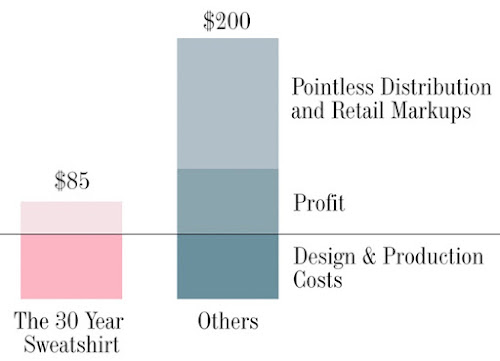 Cleverly, Tom has outed the uncomfortable truth about the high price of luxury clothing: the huge percentage of the final price that is taken up by distribution and retail markups. By selling directly, he can not just undercut those prices, but ignore them completely. Which is why a high-end garment like the 30-Year Sweatshirt is priced at only £55 ($85). That's ridiculously cheap, and just goes to show what happens when you cut out the middlemen.
Much as I hate to gloss over The Sweatshirt when it's not yet been funded, I was interested to know what Tom has in mind for his next step.


"The 30 Year Sweatshirt is all I’m focusing on at the moment, but the Tom Cridland brand will eventually scale from just trousers and now The 30 Year Sweatshirt to include shoes, socks, swimming trunks and dress shirts. Each of these will be launched separately though, as special stand alone projects."

Modest as ever, Tom neglects to mention that his Kickstarter has a stretch goal (for those of you unaware, if a project does amazingly well, further rewards and products become unlocked) that takes another staple and gives it the Cridwell treatment: the 30-Year T-Shirt. Now that's an interesting idea...
As you can probably tell, I'm extremely excited about this product. It's everything we like about ethical fashion: fast-moving, disruptive to the broken old ways of doing things, and blending the best of ancient and modern techniques to create a garment that's a real investment. You have until July 15th to support Tom and his new venture: at the time of writing he's just over 10% of the way there with 26 days to go to hit his funding goal. 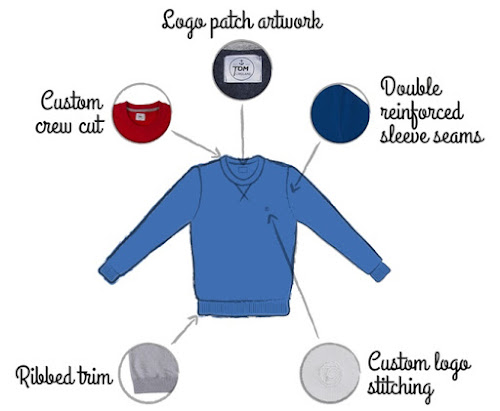 This is the point where you can really help to support ethical fashion, enabling a young designer to create something beautiful, durable and sustainable. If my maths are right, and if Tom's assurances as to the long-lasting appeal of the garment are true, your £55 investment means you get The Sweatshirt for under 2p a day.
I don't think you can call that anything other than a bargain.
Get over to Tom's Kickstarter page to find out more about the 30-Year Sweatshirt: https://www.kickstarter.com/projects/tomcridland/the-30-year-sweatshirt