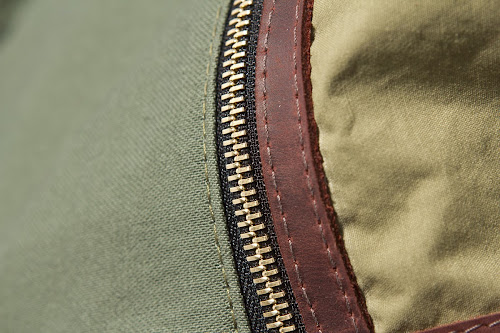 It was ever the dream: to be able to put away the weapons of war, and turn them instead into tools of peace. Sadly, we're nowhere near that dream. If anything, it seems to be fading further into the distance. But we can, at least, be thankful for Emily Nunez, whose company Sword and Plough is using military surplus in ways for which it was never intended.
Emily and her husband started Sword & Plough after attending military school, as an attempt to bridge the gap between the armed forces and the general public. She wanted to give something back, and show at the same time how commitment to the military can also be a strong commitment to peace and reconciliation. That was mirrored in the company's other driving force; a firm belief in the environment and sustainability.
Sword & Plough make bags, totes and rucksacks with a tough, military-inspired feel. They manufacture exclusively in the U.S, keeping transport costs low. 85% of their raw materials is sourced from military surplus material. The staff that sew their bags are almost exclusively army veterans, given a chance to reconnect with a community that can sometimes seem alien to them after the trials of the battlefield.
Sword & Plough donate 10% of the money they make to veteran support non-profits, but the support they give to the ex-soldiers who work for them is priceless. Environmentally, Sword & Plough are at the top of the list for promoting sustainability. Their bags prevent thousands of pounds of textiles from entering landfill. Similarly, they are helping to keep a bunch of veterans from ending up on the scrapheap.
Emily says:


"The lifecycle of our surplus material mimics the transition veterans make from the military to civilian environment... it makes perfect sense that we support the US economy through our efforts by creating jobs and, where possible, jobs for veterans."

It's a laudable aim, carried out with pride and attention to detail. The bags are rugged, utilitarian and have years of service ahead of them. That somehow seems appropriate.