How Prawns Could Get Ethical Fashion Onto The High Street 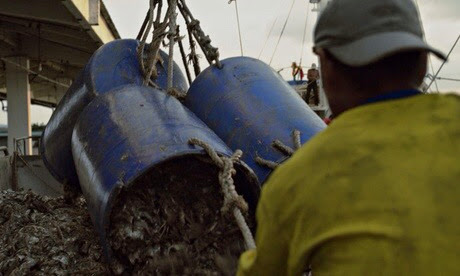 There's been some encouraging news in the past couple of weeks about social responsibility, and more importantly, our attitude towards it as customers.

After a Guardian investigation into the harvesting of prawns in Thailand by forced labour--OK, let's not beat around the bush here, slave labour--the UK Government has pushed for much stronger safeguards on the food we eat and the clothes we wear, to ensure that they're produced fairly and without exploitation. The consumer affairs minister, Jenny Willott, has gone so far as to state that brands must do more to promote a strong ethical standpoint, or risk losing customers. She said:

"Following the anniversary of the Rana Plaza disaster earlier this year, we saw another high profile case involving oppressive labour practices in the production of prawns in Thailand.

"Consumers are increasingly aware of these issues and concerned about them. As a result of this public interest, we have an opportunity to highlight those companies taking positive action and encourage others to make a real difference."

This bullish tone is backed up by an extraordinary poll for Ipsos Mori, in which 83% of respondents agreed that a company's ethical policy mattered to them. Two out of every five said that they would spend more on a product if it had a proven clean record, despite the current squeeze on household spending.

With consumers starting to take the lead, the government is moving to take steps over ethical sourcing. In a statement to the British Retail Consortium, Willott singled out H&M and Marks and Spencer as companies with strong ethical policies that are applied through their entire supply chain. The inference is clear: these are big names that can still put eco-friendly, exploitation-free credentials at the heart of their business. If they can do it, why can't everyone else?

It's funny how the smallest of things can have such a huge potential result. The humble prawn could be the catalyst for a true revolution in fashion retail, bringing strong ethical policies onto the high street, backed up by a government that, while following the lead of its people, will end up making transparency and ethical practices a pre-requisite of doing business in the UK. Ultimately, that change has been mentored by us, as consumers making the right choices for the right reasons. We don't want to buy products that are the product of cruelty and the government seems to be indicating that, for once, it's on our side.