We're Fighting Homelessness With Dean Porter And The Big Issue!

Homelessness is once again on the rise, with drops in benefit and the "bedroom tax" making it more likely that hard-working people on the financial razor's edge will lose their homes and be forced out onto the streets. It's a terrible situation to find yourself in, and here at The Pier we want to make sure that homelessness becomes a historical aberration rather than stark reality.

For the second year running, we're teaming up with The Big Issue as they ramp up sponsorship for their London To Paris Bike Ride in July. 230 km on two wheels, except for the bit across the Channel, which is by pedalo*. Big Issue vendor Dean Porter is doing the ride, and Pier32 have happily provided T-shirts for him.

Dean popped into the Big Issue offices yesterday (Monday) to check out the wares, and we have to say: doesn't he look the business? 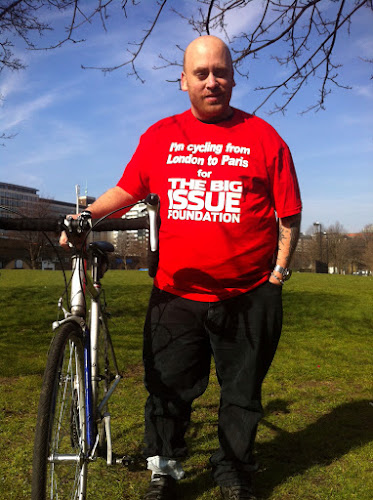 If you fancy joining Dean on the ride, you can sign up at the Big Issue website. It takes place from the 18th-21st of July, ending in time for you to check out the final stage of the 100th Tour de France in Paris. Sounds too much like hard work? Why not just sponsor Dean instead at his JustGiving page?

Let's face it. It's cold out there, and the streets are no place for anyone to spend the night. Join us and Dean, and let's ride homelessless out of town. 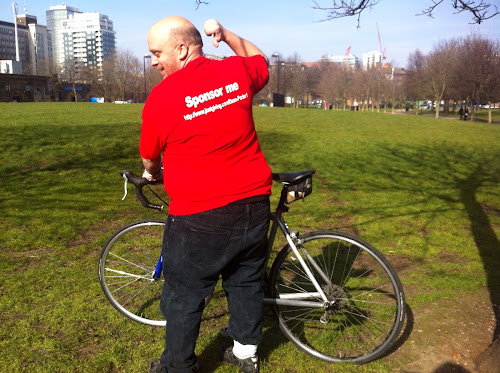 *not by pedalo at all.

Email ThisBlogThis!Share to TwitterShare to FacebookShare to Pinterest
Labels: charities, our clients, our clothing products