Give Bear A Job!

Back in January, when Team Pier were at the NEC supporting our friends at Kartforce as they drove in a charity challenge, we met a guy called Bear. Like most of the Kartforce guys he was ex-Forces, back in Blighty after over 20 years of service for his country. He was looking for a job.
He's still looking, almost three months later, but he's doing so with the intensity and focus that comes from a career in the Army. Using Twitter to raise awareness, he's been on local radio, had a feature piece in the Independent, and been retweeted and mentioned by hundreds of people worldwide. What does he have to offer? Well, let's let the man sell himself (collated from his massive tweetstream)...


"As well as testing Jaguars and Land Rovers for JLR, I am also a trained chauffeaur and advanced driver (RoSPA). I have a licence that can only be described as full, and I'm very proud to say is clean. I'm an ex-soldier who's professional, intricate and a perfectionist in he does. If you want a grafter with ingenuity, discipline, common sense initiative and couraage, then you've come to the right place!"

Bear (he uses the nickname online for security purposes) is a trained Army mechanic who has maintained incredibly expensive and complex front-line equipment. He can drive anything and fix anything. He'd make a brilliant chauffeur/handyman for a corporate client, but his organisational skills (he's run decent-sized charity events) mean that he could turn his hands to practically anything.
He's all over Twitter, and he's not giving up. Frankly, it's the least we can do here at the Pier to give a friend a shout. So, let's finish the week with a battlecry and a call to arms. Give Bear A Job! 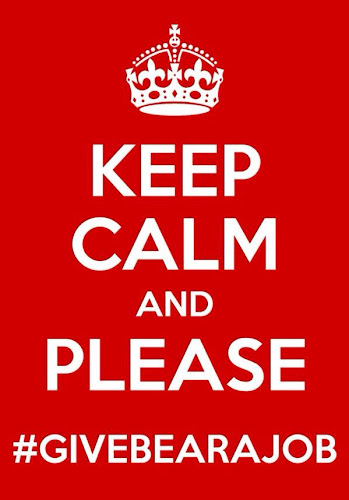 You can follow Bear on Twitter as @BigBearF1, or check out the hashtag #givebearajob. Everyone at Pier32 hopes you get the job you deserve soon, big fella.

Email ThisBlogThis!Share to TwitterShare to FacebookShare to Pinterest
Labels: Kartforce, our clients