Walking With Pride and NAT

Pier32 are supplying t-shirts for the National AIDS Trust, as they join the throngs of people hitting the city for London Pride. Here's more on what they do, how they're doing it and how you can help!

On 29 June 2013 NAT (National AIDS Trust), the UK’s leading campaigning HIV charity, will be walking at London Pride. We will be promoting our message of getting people passionate about HIV activism.
With a 50-strong crowd we will be marching down Baker Street, through Oxford Street and Trafalgar Square to Whitehall. The route is only two miles but it will take us about three hours.
While we are marching we will be wearing t-shirts, supplied with support from Pier 32, asking people to ‘GET PASSIONATE’ and become a HIV Activist. By wearing our message literally on our chests we will be channelling HIV Activism that was so important in the early days of the HIV epidemic.
We will be giving out stickers, holding up placards, and making our voices heard. By doing this we hope to sign up more people to our HIV Activist Network.
The HIV Activists Network is a virtual group of individuals who are passionate about the rights of people living with HIV - and want to campaign for change.
The group brings people together and provides the tools and information they need to take direct action on issues affecting the lives, rights and well-being of people living with HIV and communities at increased risk of HIV.
Susan Cole, community engagement officer, said:

“The Network combines people’s voices – the more we have the louder they will be.”

NAT will be marching in the front section of the London Pride parade on 29 June 2013.

You can find out about becoming an HIV Activist at www.lifewithhiv.org.uk/hiv-activists-network

As promised, here's a pic of the NAT guys and gals in their Pier32-supplied T-shirts. Looking good, everyone, and best of luck tomorrow! 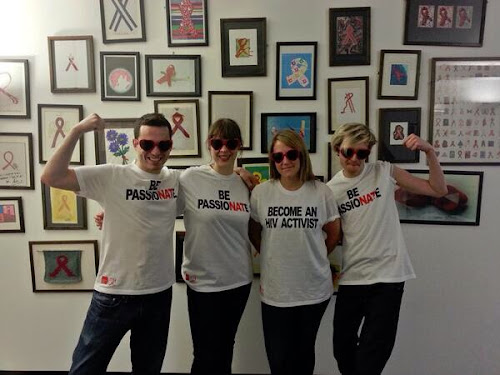 Email ThisBlogThis!Share to TwitterShare to FacebookShare to Pinterest
Labels: charities, our clients, our clothing products, Pier 32