I'd like to finish our week of client profiles by highlighting a charity that Pier32 has started working with fairly recently: marine conservation group Sea Shepherd.


Their mission: to end the destruction of habitat and slaughter of wildlife around the UK's coastline and across the world’s oceans. They're a direct action organisation that have been running since the 1970s, with a fleet that includes 4 capital craft, over a hundred active crew members and a support flotilla of RIBS, other fast response-craft and even a unmanned drone squadron! 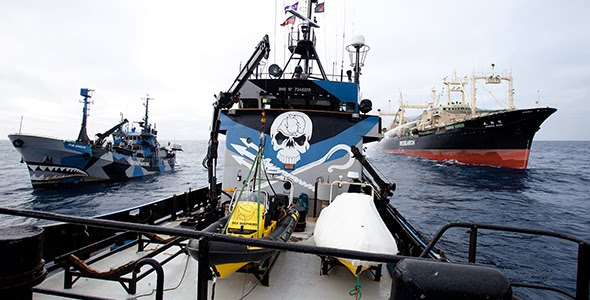 Since the days of the first 'Sea Shepherd' (a converted trawler involved in an all or nothing battle with unscrupulous whalers that led to the ship being scuttled in a Portuguese harbour) the organisation has fought with any and all means at its disposal to protect marine wildlife and conserve their habitats. Under the command of founder member Captain Paul Watson, Sea Shepherd continues to make waves with their operations against illegal whaling, seal and sealion hunts, dolphin killing/captures and the killing of over 76 million sharks a year for their fins.

Make no mistake, Sea Shepherd are not desk jockeys. Their actions, with code-names like Operation No Compromise, Operation Zero Tolerance, Operation Relentless (their ongoing campaign to protect whales in the Antarctic) and Operation Grindstop defending dolphins in the Faroe Islands show how the Sea Shepherds take the fight to the poachers and illegal fishing or whaling boats worldwide. Their actions has led some to describe them as pirates, a label that the Shepherds have gleefully expropriated with their trident-and-hook Jolly Roger insignia, and dazzle camo painted boats.

They may be considered the renegades of the marine conservation movement, but the fact remains that Sea Shepherd get the job done. Japanese whaling fleets are regularly sent home in disarray, with a fraction of their kill quota. Sea Shepherd are aiming to up their game by refusing the fleets a single whale in their new campaigns. They call themselves the 'Whale's Navy'. Let's hope, as demand for whale meat declines and the Sea Shepherd's actions sink the whaling fleet economically - that one day there will be no further need for direct action anti-whaling campaigns.

Until that day comes, Pier32 are proud to support Sea Shepherd. You can find Sea Shepherd at many events around the UK throughout the year - to find out where they'll be next, check out Sea Shepherd's events on their website at http://www.seashepherd.org.uk and find them on Facebook at www.facebook.com/SeaShepherdUK

The Sea Shepherd UK Online Store can be found at http://stores.ebay.co.uk/Sea-Shepherd-UK-Trading-LTD

Pier32 supply Sea Shepherd with a wide range of hoodies, zoodies, beanies, t-shirts and caps from Starworld, AWDI and Headwear. Here's a selection: