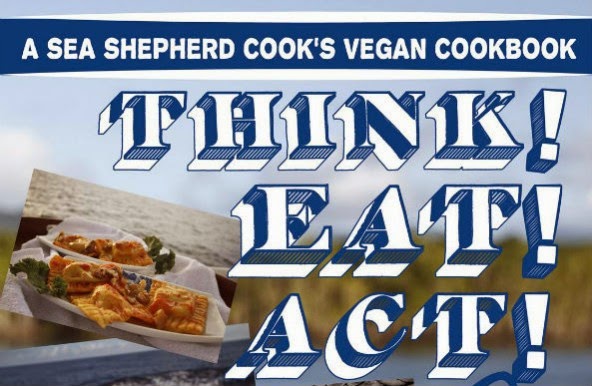 A couple of weeks ago, I wrote about the sterling work our friends at Sea Shepherd are doing out on the oceans of the world, protecting wildlife from the rapacious advances of whalers. They have a fleet of ships that at any one time can be anywhere from the Arctic to the Antarctic, Norway to Japan.

Any sailor would agree with me, I think, when I say that the heart of any ship is its galley. You can't be out saving the whale on an empty stomach. So I was heartened (and alright, a little amused) to see that Sea Shepherd have just launched a Kickstarter fundraising campaign... for a cookbook.

Think! Eat! Act is a collection of vegan recipes that are prepared and served on board the Sea Shepherd vessels for their hungry crews. Written by one of Sea Shepherd's chefs, and inspired by the group's goal of protecting the animals that are victims of human cruelty, this book uses delicious vegan food to show readers that every action has a consequence, and that you can live both well and compassionately, even while facing the challenges of being an activist living on a ship. The book also contains plenty of hints and tips on taking up a vegan diet, and the philosophy and thinking behind it.

Although Think! Eat! Act! has already reached the initial funding goal, they're looking to stretch that to afford a much nicer package, including lie-flat binding and coated pages: both a must for any cook that actually plans on using a cookbook in the kitchen!

We are, of course, fans of Sea Shepherd and their good works. We are also fans of food and eating. Although I'm no vegan (as a lapsed vegetarian, I'm probably the polar opposite) I can certainly see the benefits of a meat and dairy-free diet. If you're interested in seeing what being a vegan cook on board a working ship is like, check out Think! Eat! Act's Kickstarter page.

Email ThisBlogThis!Share to TwitterShare to FacebookShare to Pinterest
Labels: environment, our clients