Getting The Need For Speed With Kartforce

The Pier32 team crammed into the Piermobile late last week for a trip up the M6 to Birmingham, for the Autosport show at the NEC. Although we are for the most part petrolheads (yr humble writer not included, more on that later in the week), slobbering over the rims and shocks was not our primary reason for hitting the Midlands.

We were there to support Kartforce, the charity that helps injured veterans by giving them a chance to prove themselves out on the race-track. They were competing as part of a charity event headed up by racing legend Johnny Herbert--a 3-hour endurance go-kart race. 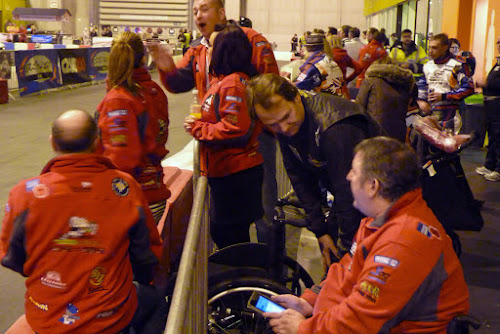 You shouldn't roll your eyes. These machines are low, light, hugely manoeuvrable and bloody quick. They can do a lap of a quarter-mile circuit in something under 30 seconds. Not bad for something with a two-stroke engine in it. 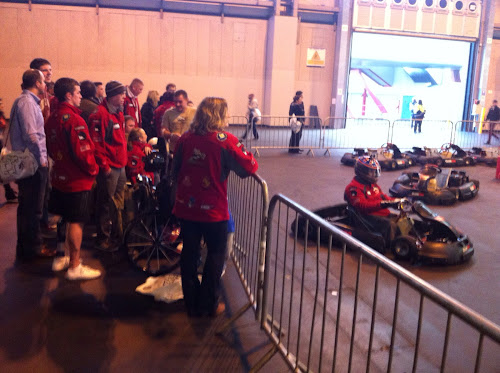 Pier32 are sponsors of the Kartforce team, who race using specially modified machines. As they have three legs between the four of them, that's kind of handy (if you'll excuse the pun). But the boys were given no special treatment out on the track. Kartforce were there to compete, and they didn't need any favours. They had one ace up their sleeve, though. Each of the 20 teams on the grid had a celebrity driver to help or hinder them, and Kartforce lucked out big time. They only went and got themselves The Stig. Ben Collins, Bond stunt driver and the first man in the iconic white suit and helmet was there to give advice, support and to tear up the track. He wasn't slacking, either--Ben was very much a part of the team from the get-go. He was a blur of motion both in the pits and behind the wheels of the kart. 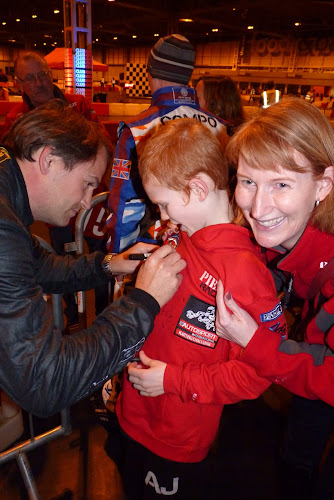 Ali, Pier32 Mascot And Future Head Of The Company took something of a shine to Ben, following him around all day with a wide-eyed starry look. The Stig, bless him, was ever patient and never ignored him, answering all his questions. When Ben signed his fleece, I think all Ali's Christmases had come at once.

About that fleece. As part of our sponsorship deal, we provided Kartforce with their official team wear. The fleeces are lovely, warm Regatta numbers, covered in logos. Styling race wear. I got to keep one, which was an unexpected treat. I shall wear it with pride--it helps to spread the word about both Kartforce and Pier32. The race was an endurance event, with plenty of drama and shifting fortunes. In the last half hour, as tiredness set in, mistakes started to be made, and the tracksides were heavily banged about. Lts of flying plastic. There were no major crashes, but plenty of bumps and black flags. This wasn't a banger race, and everyone was deadly serious about doing well.

In the end, Kartforce managed a very creditable 12th place, beating some fairly serious karting teams. That was a solid result, and I reckon the Kartforce guys can walk away from that with their heads held high. It was a long day, but a worthwhile one that will stick in my memory for a while. Here's to the next one!

For more on the great work that Kartforce do for our injured veterans, check out the website. Thanks so much to Dave and the team for letting us join them on their big day.

Email ThisBlogThis!Share to TwitterShare to FacebookShare to Pinterest
Labels: charities, our clients, our clothing products, Pier32