Today, we're chatting to a long-running friend of the blog, UK-based shark and marine conservation charity Bite-Back. They celebrated ten years in the business of keeping the seas safe last year. But that doesn't mean they're resting on their laurels. If anything, Bite-Back are angrier than ever.

Consider the shark. Nature's deadliest predator, right? A cunning and clever foe, who likes nothing better than to sneak up on scantily-clad girls on surfboards for a quick snack. They must kill hundreds of people every year.

Well, not quite. Shark attacks make for great headlines, but they're amongst the least likely things to happen to you if you decide to frolic in the waves. The genocide happening on the high seas is all one-way, and the victim is shark-kind. Our taste for shark fins and meat, as well as the thrill sports-fishing types get from landing their very own Jaws, means that we take 100 million sharks from the sea every year. If you want to do the maths, that's roughly two every second. That rate is simply unsustainable. Sharks, unlike most fish, don't reach maturity until the age of seven, and even then only birth a few pups a year. We're killing them faster than they can reproduce. At the last count, twenty different breeds of shark are on the endangered list. 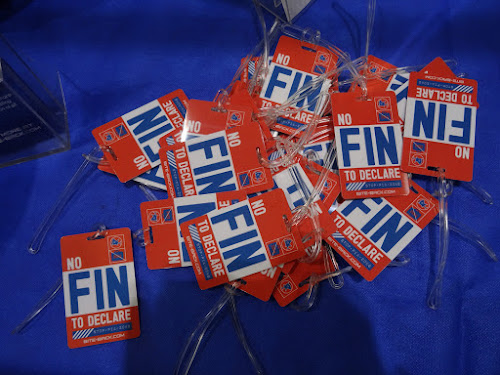 This is where Bite-Back comes in. They actively campaign on behalf on our finned friends, aiming to slow and even halt the trade in shark products. There's hardly any restriction. For example, look at the limits on fresh produce that can be brought without charge into the UK. There are tightly controlled limits on almost everything. But shark fins? The limit for one trip is 20 kilograms. The Bite-Back stall at the London International Dive Show helpfully had a hold-all loaded to that weight limit. I could barely lift it. With no controls on how shark products are imported, it's not surprising that they are on the endangered list. Peter Benchley has a lot to answer for. 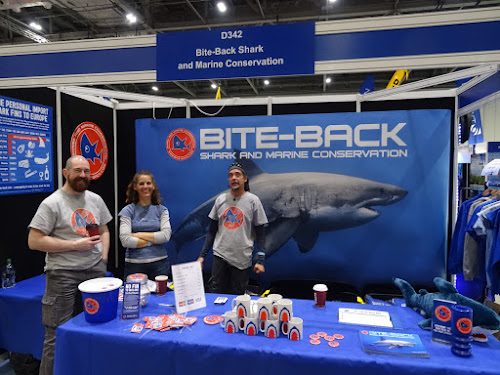 Bite-Back's latest campaign aims to redress the balance, urging us to think a little more about the creatures who have possibly the worst press on the planet. Over-consumption is the big problem. If we stop eating shark, there's no reason to trawl for them.

Thanks as ever to Team Bite-Back, who made us very welcome and even persuaded me to buy one of their cool new luggage tags. I'm convinced about the danger we pose to sharks. If you need a little more info, set your sails towards www.bite-back.com.