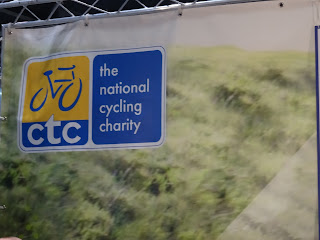 Our last visit of the week is to CTC, a charity with a long and storied history. It began back in 1878 as the Bicycle Touring Club. Originally, the club was a gathering of like-minded types around the ever-increasingly popular pastime. But over the years the remit has expanded. Along with a name change to Cyclist's Touring Club, CTC has become an advocate for everyone that believes two wheels and your own effort are a great, safe and healthy way to get around.

CTC are a big part of British cycling. They developed the first cycling proficiency test in 1936, one that has been officially adopted and is still in use today. CTC is still at the forefront of bike safety training and Bikeability.

All of this becomes obvious and important when we realise just how popular cycling has become in the UK as a sport, a healthy pastime and a great mode of transportation. Studies indicate that the majority of rush hour traffic in the next couple of years will be cycles. For most urban journeys, the bike beats both bus and car for speed, efficiency and cost.

It's worrying, therefore, to see the press, local government and even the courts appear to be actively against the notion of cycling on Britain's roads. The image of the lycra-clad lout is all-pervasive, and horribly inaccurate. CTC are working hard to change that. Recent CTC campaigns include Road Justice, which seeks a justice system that discourages bad driving, educates drivers to a higher standard and takes bad drivers off the roads, and Action On Lorries, pushing for an end to the slaughter on the roads that led to six cyclists dying under the wheels of lorries in just two weeks.

Of course, CTC are there for the fun stuff as well, and can help you organise ride-outs, gatherings and even cycling holidays. In short, if you think two wheels good, CTC is the organisation for you. You can support through donations, but membership gives you access to all sorts of goodies, from the bi-monthly magazine to third-party insurance!

To find out more about CTC and how they can help your cycling life, just check out the website.
Posted by Rob at 09:31